JVCKENWOOD Corporation is pleased to announce that it has developed a new in-vehicle FIR camera system that enables distant video shooting and image recognition at night regardless of the existence of light sources by the leveraging video technology it has cultivated.

The new in-vehicle FIR camera system we have developed can shoot videos and recognize images at night regardless of the existence of sunlight, streetlights, or other light sources, by making use of the video technology that is highly regarded from the market in camcorders and dashcams. This makes it possible not only to record highly visible videos but also to detect and warn people and objects in scenes that are difficult to see such as at night, providing drivers with even greater safety and security.

We will promote the use of this newly developed in-vehicle FIR camera system as a warning system for nighttime driving and an in-vehicle camera for automatic driving. We will also make proposals to a wide variety of sectors, including its installation in professional vehicles used at construction sites and security camera systems, for which there is strong demand for nighttime visibility improvement technologies, not limited to automobile applications. For this reason, we will further develop this product as a new camera solution in order to, among other things, expand the system lineup in accordance with the market characteristics of each sector and construct systems combined with other sensing devices. 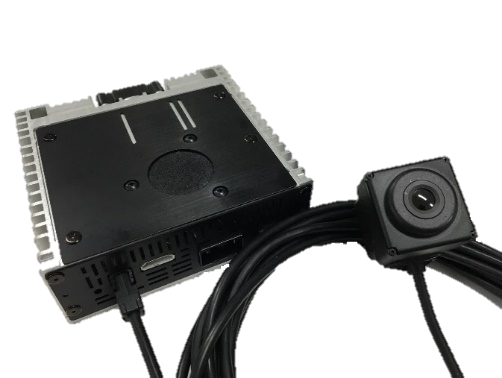 Using the microbolometer sensor (QVGA 320 × 240 12 μm) developed by Lynred, a leading manufacturer of far-infrared sensors, and an image correction technology based on proprietary algorithms we developed in cooperation with Lynred, we have successfully improved the quality of far-infrared images. The camera part is equipped with a small in-vehicle optical lens unit we developed with Sumitomo Electric Industries, Ltd., making it possible to eliminate the optical lens protection window and ensure shockproof and weather-resistant properties while achieving compactness. In addition, the camera unit was downsized (37 × 37 × 39 mm) for easy installation on the front of a vehicle, which has a small projected area and limited space. When it comes to reliability, we have conducted driving tests for over 100,000 km to ensure reliability even in snowy and cold regions.

We have installed a system that recognizes and warns of people at night, which is the most effective function for an in-vehicle FIR camera system. The recognition engine is equipped with a lightweight algorithm developed using our proprietary technologies. This has made it possible to mount both a recognition system and a camera system on a general-purpose CPU without using an expensive CPU dedicated to image recognition, resulting in a simplified and low-cost ECU*2 system. Parallel development of the recognition system and the camera unit has allowed mutual benefits for the developing parties and improved the level of development on both sides, resulting in the ability to recognize people more than 100 meters away.

3．Supports detection of animals as well as people

The newly equipped recognition algorithm can support animal recognition by switching the detection dictionaries to detect different objects such as people and animals with a single algorithm. This recognition system can be used not only for in-vehicle areas but also for various other applications.

Pedestrians can be recognized even on a night road where they are not visible.

Human figures can be recognized even when they are buried in the backlight from the headlights.

●Company names and product names contained in this press release are trademarks or registered trademarks of their respective owners.