Maintain a strong will, refuse to give up, and stay true to yourself as you move forward.

The valuable experiences that fueled me also made me who I am today.

I've had a great many experiences in the more than 30 years I've been working at the JVCKENWOOD Group. I can remember happy times, sad times, and painful times, but ultimately, my most intense memories are of the first 10 years I spent working here, and I believe that these experiences made me who I am today.

In April of 1982, I joined Tohoku Trio (now JVCKENWOOD Yamagata Corporation) as part of the first generation of employees. From the very next day, I was involved in human resources and management work. Because it was an entirely new company, there were no precedents for anything and no experts around to consult. Since this was pre-Internet, we researched in books and over the phone in order to learn the business, draw up rules, and do whatever we could to make the company function.
When I was in my mid-twenties, my only coworker had to stop working temporarily, leaving me as the sole employee for about six months. It was no longer just human resources and accounting; I also had to take on administrative duties, plant patrol, and everything else all by myself. This period happened to overlap with book closing (which back then was performed in November) and year-end tax adjustment, so the amount of work was staggering. But the first thing I did was assign priorities to all my tasks so I could move forward with my eye on efficiency. I admit, things were tough back then, but because I was researching new things and putting them into practice for myself, I learned a lot and gained a deep understanding of why the work I'm doing now is necessary, what it means, and the importance of working efficiently when you're busy. When I actually managed to pull it off, there was a wonderful sense of accomplishment, and it helped give me the strength and confidence that I have today. I have nothing but gratitude to my superiors at the time for entrusting me with such important work.

After that, I worked in the human resource division at Kenwood, in the administrative division of affiliates, and in the human resource division at one of the business centers, and then in June of 2013, I became Representative Director of the Board and Chairman of JVCKENWOOD Partners Corporation, which has been an important chance for me to learn from the management perspective. Since this is naturally my first time to serve as a CEO, there were many unknowns, but I looked back on the things I've seen and felt during my experiences, and thought about what our customers want from us.

With so many people in the company, it's important to express your thoughts in your own words. In October 2014, a year and four months after I became CEO of JVCKENWOOD Partners Corporation, we opened a convenience store on the premises.
Deliberation on opening a convenience store was triggered by the complaints and requests for a store from managers and employees. When I think back on my time working in Human Resources, I remember skipping meals while staying late at the office to work overtime, and seeing my colleagues eat snacks to stave off their hunger. I've always wanted to do something about that, and so, with the backing of management, I made the suggestion that we open a convenience store on the premises.

At first we were working to open one convenience store at the head office, but plans grew to open three stores including other locations as well. This caused quite a commotion in the company during the planning period. We encountered so many unexpected problems and challenges that in all honesty I started to doubt whether we'd ever succeed, but I expressed my feelings to the staff in my own words, and my will was strong enough to persuade everyone to open a convenience store at the head office.
Then, on October 2, 2014, the day of the opening arrived. Partners and the related departments put all their effort into the opening ceremony, which was a big event that I still remember even now. I'm so grateful for everyone's hard work.
For someone like me in the human resources field, the reason why I was able to summon up the courage to think “I'll get it done; just watch!” was because of the support of everyone around me, my past experiences that taught me not to give up, and the company for being the kind of place that would accept me as I am. That's something I'm grateful for even now.

To achieve diversity, we have to embrace individuality and keep on evolving.

Diversity requires an environment where you can express your aspiration. I've spent several years with my ears to the ground, working to improve my awareness, and the important thing is that changes in the world around us spur changes in the company and in each individual employee. I think that what we need in order to achieve this is an environment that embraces individuality, where anyone can express their feelings and opinions regardless of their gender or their position. We also need the sincerity and forward-facing attitudes necessary for people to speak their minds. Of course it does take energy to make yourself understood, so I think it's beneficial to have your own means of releasing stress. For example, I like music, so I enjoy going to concerts to de-stress.

I also think that in order to grow as a businessperson and come to play an active role, it's necessary to confront the challenges in front of you. Of course, everyone is going to encounter unavoidable obstacles and sometimes even hit the wall, but when this happens, I want you to refuse to give up. Rather than doing nothing, it's important to be fearless in the face of change and confront challenges, even if you fail. Tenacious effort is what will help you overcome these obstacles. After all, we only have one life to live, so we should live with passion! 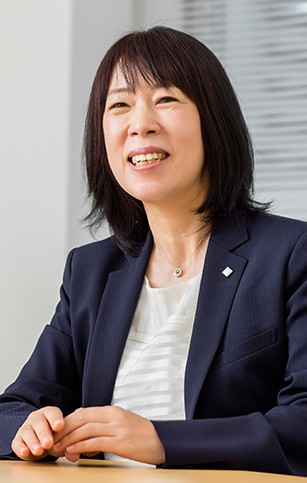