An age when diverse lifestyles will lead to greater happiness. Promotion of diversity is essential.

To become a company where every individual can work with energy and vitality in their own way.

I have been in charge of human resources, general administration, legal affairs, and group management since 2013. JVCKENWOOD began pursuing diversity around October 2015. With the use of the word diversity growing in the community, we felt that we also needed to take some action ourselves. At that point, we set up a formal organization and finally stood at the start line. Our goal was to realize a meaningful workplace in which the diversity of every individual employee was respected and our diverse people could work with energy and vitality.

So, we had made a start, but to be honest, there was some concern about how much interest there would be. At the time, the word diversity was gaining some currency even within the company, but it was another matter when it came to taking real action. We needed to instill the concept of diversity into each of our executives and employees and embed it in our corporate culture. The themes involved were many and varied, including gender, race, nationality, physical ability, sexual orientation, and age, and we could not change things overnight. First, we had to decide what themes we would prioritize and how we would move forward. At JVCKENWOOD, we had the problem of an extremely low percentage of women in management positions, so we decided to start with efforts to promote the active participation of women. 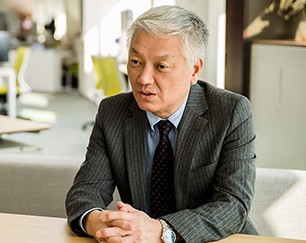 No need to distinguish between men and women in work. Accelerating the promotion of women’s active participation in the workforce. My own impression, from my experiences in the two past overseas postings, was that there were very few places in the company where women could play an active role compared to other countries.
For example, important posts in Singapore, such as General Manager of the Human Resources Department, the Manager of the Personnel Section, and the General Manager of the IT Department, and close to half of the senior executive positions in Shanghai, including the General Manager of the Manufacturing Department, were held by women.During discussions, these women asserted their own views without giving an inch, and on many occasions, I witnessed them and their counterparts become quite heated. There were even times when they were almost at each other’s throats. In their work, there was not a trace of consciousness that the other person was a woman or a man. Gender had absolutely nothing to do with it. They were all simply individual human beings, for whom it was completely natural to clash with each other earnestly from their respective positions.

When I looked back on those times, it occurred to me that, not just in our company, but in Japan in general, there were few places where women in senior management or close to the executive could play as active a role as they wanted. I felt that Japan was lagging considerably behind other countries in this respect. So, what did we need to do going forward as part of our promotion of diversity? There were two aspects of promoting women’s active participation in the workplace. One was the company’s problem, with its few places for women to display their abilities, and the other was an issue with the women themselves and their lack of motivation to display their own abilities. From my perspective, our company had both of these problems, and the way for us to solve them as a company was to create equal opportunities. We could provide an equal number of chairs and give them an encouraging push, telling them not to hesitate and to take a seat. Essential to this approach was to change the mindset of people in supervisory positions in each workplace, and since FY2016, we have been conducting training for supervisors of female employees. We have also started an initiative to send female employees on training outside the company as a way of raising their motivation.

Diversity is significant for the future of Japan. First we need to do all we can to change people’s mindset.

We have only just begun our journey on the promotion of diversity. If we were to liken it to a full marathon, we are at about the 10-kilometer mark. Moving forward, promoting women’s active participation in the workplace will not be our only task. There are many other themes we need to address. Our over-arching challenge for the future boils down to the fact that we must not put up obstacles that would prevent people from exerting their individual abilities to the fullest in their work in the company. Such obstacles include authoritarianism, conventional ways of working, narrow ways of thinking resulting from a small view of the world, and the kind of unconscious prejudices that everybody has. These kinds of things are products of habit and an accumulation of things over time; they are like bedrock that cannot be stripped away easily. All we can do is to keep trying different tools and methods to strip it away, such as pouring hot water over the bedrock or exposing it to the wind. Even doing that, to have diversity accepted and open up pathways for all people to choose the way they work, I believe the single most important thing we need to do right now is to change people’s mindset.

I believe that the promotion of diversity by companies is significant because it will also benefit Japan going forward. Japan’s population will continue to decline and age. According to the British economist, Lynda Gratton, the growing reality of our times is that people will no longer retire at 60, but will keep working until they are 80. Work, rest, go back to work, perhaps do a little study, etc. She says that this kind of diverse lifestyle may be what will make us happier. That is certainly true. There are many different styles and patterns of working, and we must enable each person to choose the style of working that best suits them. In a lifetime spanning 100 years, it is important to embrace diversity so that each individual can live a full, rich life. The promotion of diversity has become something that is inevitable both for the company and for Japan.