Nothing changes if you remain passive. Things become visible when you become involved with people.

A time when the concept of “diversity” was not well-known. But there were spaces for everyone to take an actual role.

When I joined TRIO (now JVCKENWOOD) in 1981 and became involved in the development of radio systems, most of those working in the development department were men. At one point, despite the development of the mobile phone starting, it was impossible to concentrate on design work due to the lack of personnel. I therefore asked my supervisor at the time to increase the number of personnel who could handle design-related work. The next year, several people—mainly women—joined the company. Of course, the word “diversity” was not commonly heard back then more than 20 years ago. But, we began to see more diversity with women joining, which invigorated the workplace. I remember how I was helped an incredible amount, gaining ideas based on unique female perspectives not obvious to me as a man and so on.

In retrospect, this workplace was a space where anyone could take an active role, regardless of gender. However, I still feel that women need more active roles at the workplace. Starting in 2015, I was stationed in Dallas, USA for about three years. There, lots of women held key roles in system development and marketing, as in-house lawyers and shipping managers, and so on. After returning Japan, I saw women in the workplace and thought more ambition was needed. I felt that women need to set higher goals for themselves. So, what is the difference between Japan and other countries? The conclusion I drew when thinking about this was about whether women have professionalism. 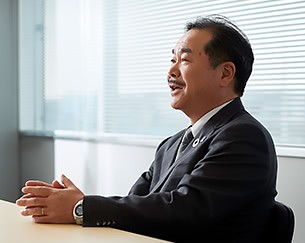 Gender is irrelevant if you have ability. Nothing starts without you moving toward your goals. Professionalism means ambition; one’s acquired skills and areas of competence will naturally expand with professionalism. One of the women who inspired me when I was in the US was a corporate lawyer who faced giant corporations alone. Another was a woman who was involved in development while also working in sales and marketing and other areas. I think it is their professionalism that has motivated these women to reach their positions. The key point is that, gender is completely irrelevant if a person has the abilities to complete the mission in front of them.

The women working at JVCKENWOOD in Japan are working extremely hard to produce results. That is why I want them to step forward to take on even greater roles. It is more important to first act than to think. One must first act to move forward. The biggest failure one can make is to worry about succeeding or failing, thinking, and then not acting. This may be a question of how aware one is, though there is more to it.
A company and those at the top are responsible for increasing professionalism in staff and creating an environment where staff can take on more active roles. When I was still in the Engineering Department, I asked female employees to work in Canada and countries in Europe in order to gain experience overseas. This was still uncommon within the company at the time. In addition to nurturing personnel who could work on a global level, I thought that it would be advantageous if women with strong communication skills could speak English. Going overseas was an opportunity for those women in terms of the future, and it also allowed the company to discover the next generation of leaders. The key is how we as managers lead. For example, just as mentally tough people are well-suited to assignments overseas, perception (putting the right person in the right place) is needed in managerial positions in order to make the most of each person's individual characteristics. We therefore must change with the times.

It is impossible to understand on-site opinions and underlying intentions and motivations without communication through conversations.

So, how should those at the top work to change the future? Seeing worksites and people is what is needed right now. Every individual has strengths by which they can contribute. To embrace diversity is to act as a manager so that each and every individual can use their aptitudes and strengths and take an active role in the organization.
In past leadership training sessions, I was taught that conversations are critical to perceive individuality. Managers cannot just think by themselves. It is only when you communicate with those under you that you develop a sense for what should be done. These words have stayed with me. We must listen to on-site opinions, personally communicate our expectations and thoughts as managers, and create environments where everyone can talk frankly and openly with each other. Right now, we must introduce these ideas to more people in our workplace. Understanding everyone on-site will lead to diversity and inclusion.
I believe the foundation for embracing diversity is now taking root at JVCKENWOOD. That is why I want everyone to hold strong aspirations and be willing to break down the status quo, regardless of gender or nationality. Instead of making excuses about the rules, we should change the rules when necessary. Leaders at the top must never stop improving work environments. They must also encourage those under them to hold strong aspirations.