Although it is not subject to the restrictions imposed by the U.S. Dodd–Frank Act, JVCKENWOOD is committed to advancing sustainable procurement globally. It is working to establish a responsible supply chain and ensure responsible mineral sourcing based on its policy of not using any components or parts that may contain four minerals (tin, tantalum, tungsten, and gold) that finance or benefit armed groups.

Significant human rights violations and environmental destruction by armed groups in the Democratic Republic of the Congo and surrounding countries have been broadly recognized as serious issues in the international community. While it has been noted that the minerals produced in this region finance or benefit armed groups, the U.S. Dodd–Frank Wall Street Reform and Consumer Protection Act (Dodd–Frank Act) names four minerals (tin, tantalum, tungsten, and gold) produced and refined in this region as conflict minerals and requires companies to disclose information on the smelters and refiners that supply components and parts that contain these minerals. In response, JVCKENWOOD has sent a conflict minerals questionnaire to its primary suppliers involved in the procurement of approximately 11,000 components/parts subject to the restrictions to identify 3TG* smelters and refiners. During the period FY2014–FY2018, JVCKENWOOD sent the questionnaire to a cumulative total of 1,558 suppliers, 96.22% of which responded.

Moreover, as a member of the Responsible Minerals Trade Working Group of the Japan Electronics and Information Technology Industries Association (JEITA), JVCKENWOOD is actively working to raise awareness for responsible sourcing of minerals outside the company, for example, by serving as a facilitator and a lecturer at Responsible Minerals Sourcing Inquiry Briefings held by the JEITA.

A proactive approach to conflict minerals is important for establishing a responsible supply chain. Due attention should be paid so that we will not become complicit in human rights violations in the course of sourcing materials. The JVCKENWOOD Group will continue its group-wide efforts to address the issue of conflict minerals in collaboration with various other stakeholders, including public and private sector partners engaged in the establishment of responsible supply chains for minerals.

*3TG: an abbreviation meaning tin, tantalum, tungsten and gold; the term refers collectively to these four minerals and their derivatives 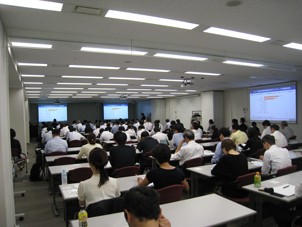